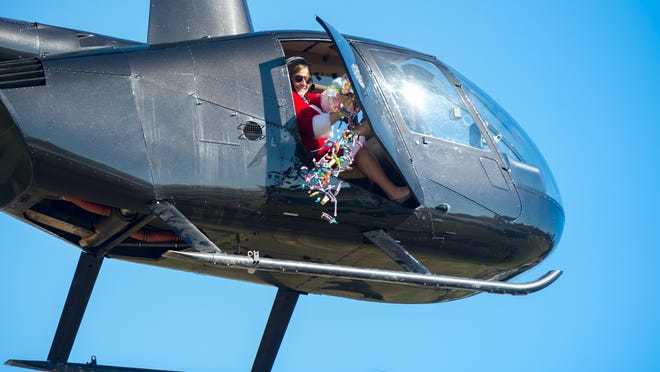 A Send off to Remember

CARENCRO — 'Twas the week before Christmas, and all through Carencro Catholic School, all the students were stirring toward the recess area for "a secret surprise from the sky."

More than 200 kids joined their teachers in tacky sweaters and flannel pajamas around the outdoor basketball court, where Principal Devin Soeseno — dressed as Mrs. Claus — was soon to arrive in a most unconventional way.

Soeseno flew to the back of campus on a helicopter flown by James Landry, pilot and parent of a CCS eighth-grader, on the last day of the semester Friday.

The copter hovered above the concrete court as Soeseno waved from the air and dropped Skittles, Starburst candies and packaged toys you would find in a McDonald's Happy Meal. They were donated by Mac-Laff Inc., a regular sponsor of the school.

Faculty kept kids at a safe distance until everything was dropped and the helicopter passed. Then students rushed the piles of candy and toys like it was a Mardi Gras parade, trading beads for reindeer headbands.

"They get tickets for being kind, for going out of their way to do something nice without being asked, for following the rules without being told," Director of Advancement Morgen Landry said.

When schools closed suddenly in March due to COVID-19, students had racked up more than 3,600 tickets, and Soeseno chose to pick up in August where they'd left off. The school hit 5,000 in time for a Christmas-themed helicopter drop before winter break.

"I'm so proud of you," she told students once back on the ground. "You worked so hard. You earned it."

She said the program aims to teach the kids to do good not only for themselves but also for others.

The school also celebrated Friday with an advent program streamed to all classrooms to limit gathering sizes.

"So we started the day with the true reason for the season, and this was the fun cherry on top," the principal said.

She seemed to have as much fun as the kids, enjoying the aerial view of Carencro as well as the Christmas spirit it stirred. That's not surprising, as Soeseno is known by family members as "the Christmas fairy" for her love of this time of year.

"I love the spirit, the magic," she said.

And this year, more than ever, she thought everyone needed a little magic and time to celebrate.

"We opened in a pandemic, we're social distancing, we're masking, we're sanitizing," Soeseno said. "There's been so much anticipation. But we made it."

After the fun, Soeseno and faculty dismissed their students, wishing a Merry Christmas to all and to all a good break.